A joint study undertaken by IPSOS and Oxford Economics on behalf of Japan And International Motion Picture Copyright Association Inc. (JIMCA) was released today, on the side of the Tokyo International Film Festival and indicated that movie theft cost the Japanese economy an estimated JPY 56.4 billion (USD 0.7 billion) in lost revenue, with 2,600 jobs forgone.

“The JPY 23.5 billion (USD 0.3 billion) direct loss to the film industry is a staggering figure and suggests that we must all urgently address movie theft, especially online. We need to act immediately as the livelihoods of everyone working in the film community are at stake”, said Takashi Ajimura, Representative Director of JIMCA. “More needs to be done in Japan to further strengthen laws to protect copyright and raise awareness of the value of creative content.”

“This is a message that it is necessary to respect and protect the people and businesses in Japan who are dependent on the movie industry for their livelihood. This report should be of great concern not only to the people in the creative community but to everyone in the country who must now think of what needs to be done to address this”opined Mr. Mitsuhiko Okura, Chairman of the Japan Association of Theatre Owners.

Mr. Tatsumi Yoda, Chairman of the Tokyo International Film Festival, said “The purpose of the Tokyo International Film Festival is to create dreams, hopes and communicate vitality through movies. These high quality works form part of the arts and culture in Japan and can only be brought about when creation - protection - utilization are linked as a circle. I hope, through this report, there will be further understanding that unconscious infringement of copyright destroys such a circle and it prevents the development of our important culture, livelihood and business.”

The IPSOS study arrived at the figures by conducting an online survey of 3,000 people aged 16 to 64, between July and August 2010. Apart from the JPY 56.4 billion loss in revenue across the entire Japanese economy and the forfeiting of 2,600 full-time jobs, another key finding of the study revealed tax losses of JPY 6.2 billion (USD 0.07 billion) due to movie piracy. Direct consumer spending losses to the movie industry, i.e. cinema owners, local distributors, producers and retailers amounted to JPY 23.5 billion (USD 0.30 billion). Of significance, 17% of the Japanese Internet population surveyed have participated in some form of movie theft or the other (downloading, streaming, buying counterfeit, borrowing unauthorised copies and burning).

The study defines and measures movie piracy as anyone viewing a full-length movie via unauthorised means, including digital theft (downloading, streaming, digital transfer), physical procurement (buying, counterfeit/copied DVDs) and receipt by secondary means (borrowing or viewing unauthorised copies). It allows for the fact that not every pirate viewing is a lost sale. 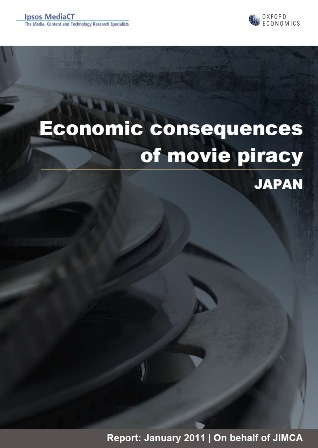 A copy of the full report can be found here